When working with networks it can feel different from the usual way of operating within a traditional hierarchical organisation such as those found in Health and Social Care. To get the most from the full range of people engaging in a learning system it may be necessary to let go of the levels of control usually experienced. Networks are about joint decision making and shared responsibility and leadership. No one person or organisation can impose direction or actions or coerce individuals into something they don’t volunteer for.

As a network creator or leader, it is possible however, as much as anyone else in the network to influence, suggest and steer the network from their own perspective. Diversity of membership increases creativity, knowledge is spread across the wider group, not dependent on a single source and this unity of knowledge encourages a safer space for people to contribute honestly.

The defining characteristics of networks include:

When a networked, collaborative approach is achieved then ownership, engagement and participation rates can be much higher than with other approaches.

When all individuals are valued and trust their peers the sharing of learning, knowledge and support increases. This provides the platform to create a system that learns for itself and can become a longer lasting and self-sustaining way of continuing improvements into the future.

A learning and developmental network where group members work collaboratively to solve problems and share knowledge and experience may be the best approach. Alternatively, it might be a network primarily set up to share resources or campaign for a particular point of view. Types of network can vary between formally managed to loosely held together social relationships.

The main types of networks are:

There are generally six discrete functions of networks:

It is likely that most networks will perform most of these functions and do more than one at any time. Working with the network to identify it’s primary functions both now and in the future will be helpful.

In the early stages of establishing a network it may be worthwhile helping others to understand why a network approach is being taken and the potential benefits of doing so:

Adapted from Effective Networks for Improvement

When establishing a network there are 5 key areas which it would be helpful to pay attention to:

Adapted from Effective Networks for Improvement

Articulating a clear common purpose is one of the most critical and first things to do. Without clear and articulated purpose which leads to action the network will have little direction and people will not see the value of being part of it. Purpose may change over time and that is okay, if it agreed with the group on an ongoing basis.

Developing a co-operative structure is about ways of working. How does the group agree to work in a collaborative, collegiate way which is non-hierarchical and equally share the responsibility, roles and workload across all members?

Building critical mass is about finding the momentum of the group. Finding the motivation and drive that encourages network members to talk about the work and advocate for change and bring in new and influential contributors.

Maximising the benefits of collective intelligence is how the network pools its resources, organises its knowledge and communicates that effectively to the wider world to achieve its purpose.

Building a meaningful sense of community is essential, group members need to trust and be trusted. In order to cooperate and share meaningful people need to feel psychologically safe and know that when there are disagreements or differing points of view that is respected and worked through.

There are four distinct stages of development that networks move through:

Adapted from Leading Networks in Healthcare

Once the network is established it is worth considering who is doing what and what each individual brings to the group. It may be helpful to consider four key roles which help both establish and nurture networks:

It isn’t necessary but it can be helpful to raise awareness of these roles and encourage people to think about where their strengths are and how they might contribute to the group.

There are other roles that might be taken by various group members and these will depend on and change with the evolving structure and purpose of the network, for example: 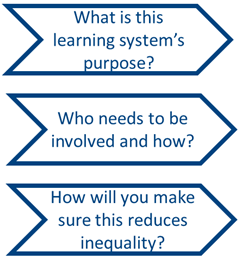 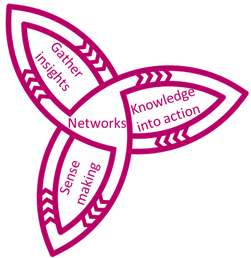 © The Learning System, Healthcare Improvement Scotland, (draft) 2020. We expect to refine this over time as we learn more from the development and delivery of multiple learning systems. Follow the link at the bottom of the page to share your feedback.