The story of SPSP

Since the launch of SPSP on January 14 2008, the past decade has seen the programme expand to support improvements in safety across a wide range of care settings including Acute and Primary Care, Mental Health, Maternity, Neonatal, Paediatric services and in Medicine safety. All of those are underpinned by the robust application of quality improvement methodology to bring about significant change in outcomes across Scotland.

Scotland has a long history of improvement and innovation projects within health care. The earliest work can be traced back five decades, which focused on audit, clinical guidelines, and evidence-based best practice.

In more recent times, learning from emergent improvement knowledge, Scotland developed a range of national programmes. These included the Scottish Primary Care Collaborative and Mental Health Improvement Programme.  These introduced, for the first time, the application of improvement science including Lean and the Model for Improvement delivered through the Institute for Healthcare Improvement (IHI) Break Through Series (BTS) Collaborative method.

In 2004 Scotland participated in the UK wide Safer Patients Initiative (SPI) launched by the Health Foundation supported by IHI. Together, with one hospital in England, one in Wales, and one in Northern Ireland, NHS Tayside and its Ninewells hospital in Dundee took part in Phase I of this major improvement programme targeting patient safety in the UK. Phase II spread to a further 20 hospitals including NHS Dumfries and Galloway and NHS Ayrshire and Arran. SPI focused on improving reliability of specific processes of care within four designated clinical areas. Once tested in the first four sites with each reporting more than 50% reduction in adverse events, the aims for SPI Phase II were announced: over a 20-month period, to reduce adverse events by 30% and to reduce mortality by 15% in each NHS trust or NHS board. All of the sites reported improvement within at least a half of the targeted 43 process and outcome measures.

SPSP is the first national approach to patient safety improvement in the world.

During the development and scoping of SPSP, global evidence suggested nearly 1 in 10 patients admitted to a hospital would be unintentionally harmed and that over 40% of the incidents could have been avoided. (de Vries et al., 2008, Weingart et al 2000, Crossing the Quality Chasm, 2001).

Facing this evidence, leaders came together in Scotland to develop the national Scottish Patient Safety Programme (SPSP). The establishment of this work was a result of a combination of multiple triggers and factors:

Recognising that NHSScotland did not have the depth and breadth of improvement skills needed, an international tender for a partner to support the work was announced. In August 2007, the Institute for Healthcare Improvement (IHI) was contracted as a technical partner for SPSP bringing their knowledge of improvement science together with experience from a broad range of international improvement programmes. The planning and pre-work for a national programme started right away. IHI’s expertise was key at this stage – whilst the work came from the Scottish system, IHI was able to provide full support from developing the aims and working with local teams to establish the collaborative.

SPSP, together with NHS Education Scotland focused on building the infrastructure to support this emerging improvement work and building capacity and capability across Scotland to ensure that there were enough skilled people to manage the programmes locally. This included Improvement Advisors, now Scottish Improvement Leader Programme (ScIL) and the development of a clinical fellowship for quality and safety. 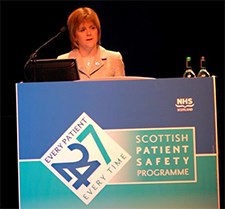 The SPSP Breakthrough Series Collaborative was initiated in March 2007 but it wasn’t until January 2008 that the first learning session and an official launch took place in Tayside. The programme was announced by Ms Nicola Sturgeon, MSP (pictured right), the then Cabinet Secretary for Health and Wellbeing together with the Chairman of NHS Quality Improvement Scotland, now Healthcare Improvement Scotland (HIS).

SPSP was initially introduced in Acute Adult healthcare settings with the aim to reduce hospital mortality by 15% by December 2012 subsequently extended to a 20% reduction by December 2015. A 16.5% reduction was achieved in this time frame.

SPSP was delivered through a Breakthrough Series Collaborative approach, with regular learning sessions alternating with action periods. Each NHS board had a nominated SPSP programme manager. They played a key role as part of the leadership, coordination and delivery at board level, with responsibility for embedding continuous quality improvement as an integral part of planning and delivery of care.

Furthermore, a new model for measuring Hospital Standardised Mortality Ratio (HSMR) exclusive to Scotland was developed by NHS NSS ISD in partnership with IHI. Monthly reports were produced for each of the teams in each of the hospitals. Good quality data was crucial and as SPSP was generating more data, it started creating credence and integrity of the programme which led to a greater belief that it was working.

In 2010, the Healthcare Quality Strategy for NHSScotland was published and launched by the Cabinet Secretary for Health and Wellbeing. This was a revolutionary moment for Scotland as it set out the ultimate aim for NHSScotland. It set out three quality ambitions – for care to be person-centred, safe, and effective. This placed improvement at the heart of national healthcare strategy and set out aims to expand the successful work of SPSP into other care areas.

Building on the learning and successes achieved within the Acute Adult programme, opportunities for spreading the approach were identified initially within the Paediatric community. In 2013 the programme evolved to support improvements within Mental Health, Primary Care, Maternity and Children, Medicines, and Healthcare Associate  Infections. More recently the Primary Care programme has expanded beyond General Practice to include Care Homes, Dentistry, Pharmacy, and Community and District Nursing.

In the constantly changing landscape that healthcare is delivered within, the range of programmes within SPSP have continually adapted to reflect their context, from the areas the programme has prioritised, to the methods and approaches in delivery. This has enabled the work of SPSP to remain current, relevant and maximise the impact across the country.

Through the work of many, SPSP has supported significant reductions in harm across Scottish healthcare. Countries across the world have and continue to learning from SPSP when designing and implementing their own safety programmes.

Scotland has led the way in demonstrating the transferability and applicability of improvement methodology beyond health and into the wider public services, creating unique collaborations among very different sectors and areas of work.

It is important that at 10 years of the Scottish Patient Safety Programme that we do 2 things; Celebrate success and thank staff who have delivered that success; those professionals working across the country in the health and social care system who have delivered infection reductions, reduced mortality and embraced the culture of change that we can all see today." Prof. Jason Leitch | National Clinical Director, Healthcare Quality & Improvement, Scottish Government